The Saint Joachim of Ithaca

Saint Joachim The Papoulakis was born in a small village called Kalivia, αcross from Stavros Village of the ithaca in the year 1786. His parents Angelos and Agni were loyal Christians. The small Ioannis (his name

before become a monk) spent difficult infant years because his mother died when he was still very young. His father Angelos married again a tough woman, which does not lose opportunity to punish and to torture the small John. Ioannis from young child has distinguished itself from the other children his age. With a lot of love and faith in Christ not missing when from the church, prayer and fasting continuously and give love and kindness to people. With much zeal was studying religious books and especially the Sacred Gospel.

When he was young he worked as a sailor on board with his father. In his travels, he left the ship and went to Mount Athos. There he became a monk at Vatopedi Monastery, and hos name changed to Joachim. He stayed there about twenty years ago and he was a model of virtue and high intellectual among other monks. With the outbreak of the Greek Revolution left the monastery and went as a missionary in the Peloponnese. From there he helps many people to escape to Ionian Islands and with Pope-Yannis from Pilaros of Kefalonia.

The Ionian Islands then held by the British. Saint Joachim feeling the risk of deterioration of orthodoxy does not return to the monastery, but returns to his hometown of Ithaca, where for almost 40 years, going in every village and in every home on the island, teaches the word of God, help the needy and poor, builds churches, inform and controls the inhabitants in matters of faith.

Living the same as great exercise and voluntary poverty, is the support, solace, hope all the inhabitants of the ithaca. For the great merit, and the distinguishing features of the humiliation, God the has endowed with the thermal and his madcap charisma, for the purpose of remorse and mental salvation of human beings. This is why the hearts and consciences of the locals have always been Papoulakis the Saint.

The assumption of Saint

On 1 March 1868,Saint Papoulakis quiet on the hard mattress at home of Mr Paizis in Vathi. He knew from before and he informed peaceful that is preparing for the eternal journey. He couldnt eat anything. At last he called his virtual monk Agapios confession in his hand and then was silent, the expectation to deliver the spirit of the hands of God. It was Friday.

After midnight his health going worst and about five o clock Saturday morning 2 March 1868 he passed away. The funeral, with a mandate of the metropolitan, took the spearheaded of the monk o Kathara Monastery. In his pocketst did not find any sum of money. The absence of poverty has wrapped up a perfect his ascetic life. Only the right hand found a piece of paper with the desire to be buried behind the sanctuary of the temple of Agias Varvaras, Stavros. Clearly and wished or last wish, with participation of the people of Ithaca, after funeral in Agios Nikolaos, in Vathi. The sequence up to Stavros Village, was on foot under the pouring rain. Only the Holy Relic was not wet from the rain.

After the assumption of Saint referred above 10 miracles to invoke the Saint. E.g. Mrs Anastasia Lekatsa from Kalivia, remember at the age of 15, the shepherd Spyros Paizis in the summer nights sleeping with the herd in the mountains. He said with AWE, that some night faced light from the opposite mountains of Vigla, to rise and to go to Agia Barbara and lost back to the tomb of St.

The official recognition as a saint of our Church was in March 1998. Memory of the celebrated 23 May each year, (day of collection of his holy relics remains of 1992). 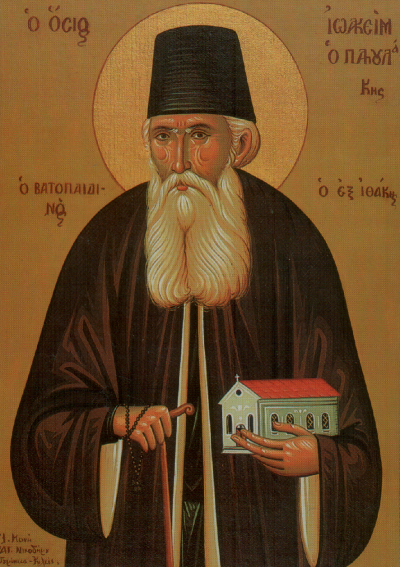 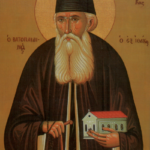