d)Karaiskakis during his stay in Argostoli hostility and hatred of his opponents, even the Rangou, who with the support of A. Mavrokordatou achieved its dominance in the Blank, winning the Karaiskaki and simultaneously pursued apinos those diekeinto friendly in Karaiskaki. Then, when Kara was still on treatment in Argostoli ‘good patriots they sent a letter to the English rule of Kefalonia pretending as dangerous villain and asking that the prison. ” Then indeed also Karaiskakis, indignant, decided to interrupt his stay in Kefalonia urgently reach as quickly Missolonghi to assert his rights in the area of Agrafa and avenge his opponents.

From Argostoli Karaiskakis in the company and Millingen doctor began to Missolonghi on December 8, 1823, at the doctor’s testimony, attempting this trip without figuring the dangerously poor health and the risk of being exposed to such a long and arduous journey in the heart of winter epeigomenos reach the fastest in Missolonghi to avenge his opponent Ragusa, who dominated with the help of Mavrokordatou Agrafa, which he considered “lawful conquest”, but the government itself, in which overflows the fury of the unjustified ousting him. Traveling Karaiskakis with the doctor to Messolongi, forced the ship carrying them, aground on Kefalonian town of Agia Effimia, weather he found them, and which temporarily allowed them to continue their journey before it subsided. In Agia Effimia the ship remained a day, probably on December 9th 1823. During their trip from Argostoli and the one-day stay in Agia Effimia, always developed in Millingen testimony of a sincere friendship. Then Karaiskakis unfolded in Millingen the genuine and true human self and the problems that preoccupied him. At the talks the two men Karaiskakis unabashedly and genuinely expressed the animosity toward the raga and Management Forum. Greece – Mafrokordato- and to the extent that, again according to the doctor’s testimony, Karaiskakis in the expression of this anim
With the decline in bad weather, probably on December 10, their ship departed from Ag. Efimia direction opposite the west coast of Ithaca where he anchored in Eagle location, at the foot of a mountain. A woman in service to Karaiskaki nursed him in his illness, only the ship anchored in Ithaca coast, stretched out on the shingle coastline a rough mat. A quickly prepared a snack, while two other “porters” women who arrived purposely carry luggage. The eagle, the Kara, the Millingen and their companions went to a wooded dense higher ones, saw f the left the ruins of the ancient town of Ulysses and then the two men were separated by informing the Karaiskaki in Millingen that it would continue the journey in Missolonghi, but would stay in Ithaca for a few weeks, probably in Kioni where the “brother” and “best man” and which would reach the island Kalamos members of his family. Eventually, Kara returned Missolonghi from his trip to Kefalonia and Ithaca in late 1823 at the beginning of 1824.
Then faced hostility and hatred of Al. Mavrokordatou, who accused him, then, for alleged collaboration with the Turks to regain t ‘Blank, resulting in introducing trial by a committee composed of his confidants “as guilty of high treason” and ordered «as treacherous and traitor to homeland with deprivation of all ranks and offices of. ” Later G. Karaiskakis, at the Alexis. Mavrokordatos traitor, was declared by the government Zaimi commander of Central Greece. Rekindled the revolution there.
Create Eleusis camp, only for the duration of our National Rehabilitation struggle in discipline and capacity. He tried to turn Kioutachis besieger from the Acropolis of Athens in besieged cutting off the supply of military supplies in men and foods from Thessaly and Evia. He strained to thwart the ambitions of the then British policy, which aimed at creating very weak Greek state only in the Peloponnese and the Cyclades and non mainland Greece. And mortally wounded on April 23, 1827 in Law. Faliro – Castella, finally succumbed to death, who was considered by many and considered as killing. Selectively conclusions A first ambiguous, in our opinion, dial conclusion and a first historical objective finding extracted from the relevant evidence relating to the C personality.
Karaiskaki and, in this regard, during the two months around stay in Kefalonia and Ithaca (CR-December 1823), and especially during the one-day stay in Agia Effimia, accompanied by the doctor Millingen are: remote from the machinations and intrigues of deadly rivals to top the Rangoon Mr. century Al. Mavrokordatos showed that it was, by then, and remained until his death “in a unique dimensions legitimate child and product – illustration of the revolutionary Greek people.
Despite the dangerous health of martial hardships and his illness, overcoming whatever those obstacles inserted, presented in Kefalonia and Ithaka real, “popular” himself as a genuine child of the Greek people and the revolution, simple , unpretentious, honest and unfeigned, in the country and acute spirit, according to the testimonies and Millingen, outspoken, narcissist, with rich decorations and floats, proud of his ancestry, which he confessed with jokes “like some ium large office. ” After all the testimony of Millingen, from his correspondence with the “brother” and “best man” of “Sior Fokas” Kioni Ithaca and its activities in Argostoli recorded Karaiskakis a lay leader, a patriot with a vision to Lefteris the homeland overcoming slander and trials and convictions, to which will always gratefully turning the thought and the calculus of the Greek Nation, drawing from it strength for sustainable continuation of the historical course.
Source: Dr. Spyros Loukatos / www.ithacanews.gr 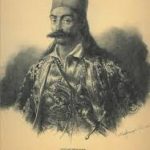